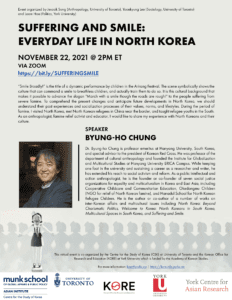 “Smile Broadly!” is the title of a dynamic performance by children in the Arirang Festival. The scene symbolically shows the culture that can command a smile to breathless children, and actually train them to do so. It is this cultural background that makes it possible to advance the slogan "March with a smile though the roads are rough!" to the people suffering from severe famine. To comprehend the present changes and anticipate future developments in North Korea, we should understand their past experiences and socialization processes of their values, norms, and lifestyles. During the period of famine, I visited North Korea, met North Korean refugees in China near the border, and taught refugee youths in the South. As an anthropologist, famine relief activist and educator, I would like to share my experience with North Koreans and their culture.

Bio:
Dr. Byung-ho Chung received his Ph.D. from Illinois in 1992 in Anthropology. He is professor emeritus at Hanyang University, South Korea, and special advisor to the president of Korean Red Cross. He was professor of the department of cultural anthropology and founded the Institute for Globalization and Multicultural Studies at Hanyang University ERICA Campus. He has been a teacher, scholar, social activist, and social reformer. While keeping one foot in the university and sustaining a career as a researcher and writer, he has extended his reach to social activism and reform. As a public intellectual and action anthropologist, he is the founder or co-founder of seven social justice organizations for equality and multiculturalism in Korea and East Asia, including Cooperative Childcare and Communitarian Education, Okedongmu Children (NGO for relief of North Korean famine), Hanadul School for North Korean Refugee Children, Rainbow Center for Migrant Youths, and Steppingstone for Peace (NGO for the Peace and Reconciliation in East Asia). He is the author or co-author of a number of works on inter-Korean affairs and multicultural issues including North Korea: Beyond Charismatic Politics, Welcome to Korea: North Koreans in South Korea, Multicultural Spaces in South Korea, and Suffering and Smile (published in Korean in 2020, translated in Japanese in 2021, and English translation in progress).

This virtual event is co-organized by the Centre for the Study of Korea (CSK) at University of Toronto and the Korean Office for Research and Education (KORE) at York University which is funded by the Academy of Korean Studies.