Making and Unmaking of the Speculative City Symposium Poster in PDF 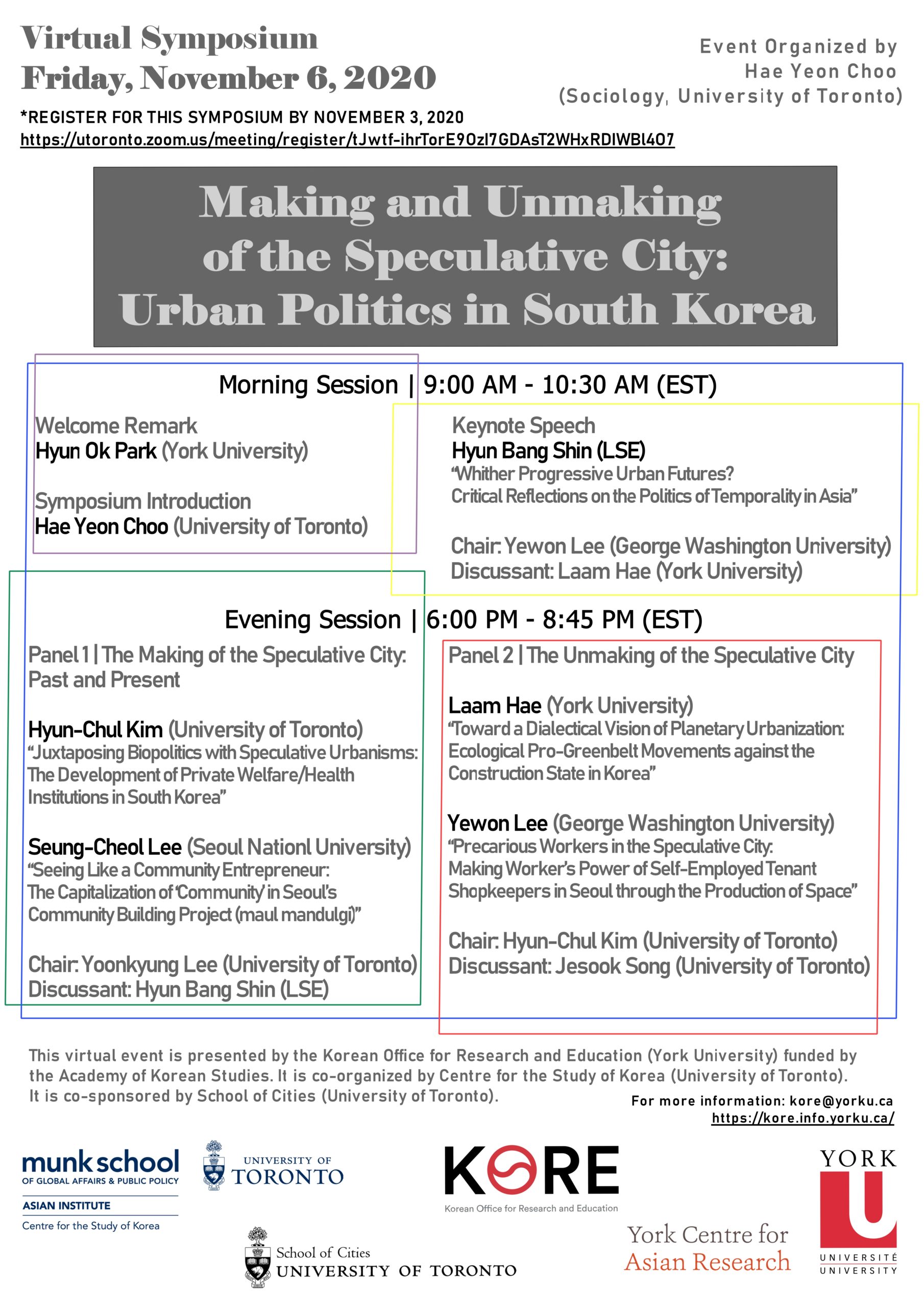 Chair: Yoonkyung Lee (U of Toronto)

Hyun-Chul Kim (U of Toronto) “Juxtaposing Biopolitics with Speculative Urbanisms: The Development of Private Welfare/Health Institutions in South Korea”

Chair: Hyun-Chul Kim (U of Toronto)

Discussant: Jesook Song (U of Toronto)

Laam Hae (York) “Toward a Dialectical Vision of Planetary Urbanization: Ecological Pro-Greenbelt Movements against the Construction State in Korea”

Hae Yeon Choo is an Associate Professor of Sociology at the University of Toronto. She is an author of Decentering Citizenship: Gender, Labor, and Migrant Rights in South Korea (Stanford University Press, 2016), a comparative study of three groups of Filipina women in South Korea: factory workers, wives of South Korean men, and hostesses at American military camptown clubs. Her current research examines the politics of land ownership in contemporary South Korea, delving into macro-level political contestations over land rights, together with the narratives of people who pursue class mobility through real estate speculation. She has also translated Audre Lorde's Sister Outsider and Patricia Hill Collins’s Black Feminist Thought into Korean.

Laam Hae is an Associate Professor in the department of Politics at York University. Her research areas are urban political economy, neoliberal urbanism and urban social movements. She is the author of The Gentrification of Nightlife and the Right to the City: Regulating Spaces of Social Dancing in New York (2012, Routledge), and co-edited On the Margins of Urban South Korea: Core Location as Method and Praxis (2019, University of Toronto Press). She is currently developing a research project that examines the spatiality of social reproduction and gender inequality in South Korea.

Hyun-Chul Kim is a PhD Candidate at the Department of Geography & Planning, University of Toronto. Her research interests include the varied degree of confined, segregated spaces in East Asian regions, from nursing homes to prisons, considering urban constructions, intimacy, and disability. She is writing her dissertation tentatively titled “Between Communal 'Village' and an Atomized 'Home': Blurring the boundaries of community organization movement and segregated-confined welfare spaces of South Korea in 1950s-1960s”.

Seung Cheol Lee received his PhD from Columbia University in 2018 and is now an assistant professor of anthropology at Seoul National University. His research interests are focused on the question of how neoliberal financialization has reshaped people’s social, affective, ethical, and political lives. He is currently working on a book manuscript that examines how the ethicality and sociality of gift-giving are grafted onto neoliberal market rationality in the social economy sector in South Korea.

Yewon Andrea Lee is a Postdoctoral Fellow at the Institute for Korean Studies at George Washington University. As a political and labor sociologist and urban ethnographer, Yewon is broadly interested in how speculative real estate interests increasingly dictate the shape and character of urban landscapes and how, in response, ordinary people organize everyday space and practice politics of dissent. Her dissertation, Precarious Workers in the Speculative City: The Untold Gentrification Story of Tenant Shopkeepers’ Displacement and Resistance in Seoul, examines how tenant shopkeepers, who are often labeled as either micro-entrepreneurs or petit bourgeoisie and overlooked as workers, are emerging as agents of social change. She sheds light on the fascinating case of tenant shopkeepers in Seoul organizing to expose the precarity of their livelihoods and, along the way, finding their collective voice as workers.

Yoonkyung Lee is an associate professor in the Department of Sociology and the director of the Center for the Study of Korea at the University of Toronto. She is a political sociologist specializing in labor politics, social movements, political representation, and the political economy of neoliberalism with a regional focus on East Asia. She is the author of Militants or Partisans: Labor Unions and Democratic Politics in Korea and Taiwan (Stanford University Press 2011) and numerous journal articles that appeared in Globalizations, Studies in Comparative International Development, Asian Survey, Journal of Contemporary Asia, and Critical Asian Studies.

Hyun Ok Park teaches sociology and the director of the Korean Office for Research and Education (KORE) at York University. With archival and ethnographic research, her research investigates global capitalism in colonial, industrial, and financial forms, democracy, socialism, and post-socialist transition. She is the author of Two Dreams in One Bed: Empire, Social Life, and the Origins of the North Korean Revolution in Manchuria (Duke University Press, 2005). Her latest book is The Capitalist Unconscious: From Korean Unification to Transnational Korea (Columbia University Press, 2015). She is completing a book manuscript, “A Sublime Disaster: The Sewŏl Ferry Incident and the Politics of the Living Dead.”

Hyun Bang Shin is Professor of Geography and Urban Studies and Director of the Saw Swee Hock Southeast Asia Centre at LSE. His research centres on the critical analysis of the political economic dynamics of urbanisation with particular attention to cities in Asian countries such as China, South Korea, Malaysia, Vietnam, and Singapore. His research themes include speculative urbanisation; the politics of redevelopment; displacement; gentrification; housing; the right to the city; mega-events as urban spectacles; mega-projects. He has published widely in major international journals and contributed to numerous books on the above themes. His books include Global Gentrifications: Uneven Development and Displacement (Policy Press, 2015); Planetary Gentrification (Polity Press, 2016); Anti Gentrification: What is to be Done (Dongnyok, 2017); Neoliberal Urbanism, Contested Cities and Housing in Asia (Palgrave Macmillan, 2019).

Jesook Song is Professor in the Department of Anthropology at the University of Toronto. Her research focuses on contemporary urban transformation and welfare issues, including homelessness, youth unemployment, single women’s housing, mental health in South Korea. She is author of South Koreans in the Debt Crisis: The Creation of a Neoliberal Welfare Society (Duke University Press, 2009) and Living on Your Own: Single Women, Rental Housing, and Post-Revolutionary Affect in Contemporary South Korea (SUNY Press, 2014), On the Margins of Urban South Korea: Core Location as Method and Praxis (University of Toronto Press 2019, co-edited with Laam Hae).