The World from the Standpoint of Asia

Steven Chung (Princeton University), "Media Archeologies for the End of the Post- Cold War in Korea"

Byung-ook Ahn is President of the Academy of Korean Studies. He is a Professor Emeritus in the Department of Korean History at the Catholic University. His research interests include the late-Chosun dynasty and the l9th-century Korean history. As the president of the Truth and Reconciliation Commission of Korea, he has spearheaded the democratic movement for truth and reconciliation. He also served as a commissioner of the Presidential Truth Commission on Suspicious Deaths, as well as of Korea Democracy Foundation. He was the longest serving member of the editorial board of UNESCO " Korea Journal."

Steven Chung is an Associate Professor in the East Asian Studies Department in Princeton University. His interests include: Korean and  East Asian film and media: and global histories of political and religious conversion to traditions in film and critical theory. Hisbook, Split Screen Korea: Shin Sang-ok and Postwar Cinema (2014) won that year's Association for Asian Studies Prize for the Best Book in Korean Studies. He is currently working on audiovisual technologies throughout the Cold War in the East and Southeast Asias.

Tae-in Chung is the Consul General of the Republic of Korea in Toronto. He was the former Korean ambassador to Turkmenistan until 2017 and served as the Korean Consul General to India from 2013 to 2014. He received his Master's Degree from the Graduate School of Public Administration and the Department of Economics of the University of Michigan. Under his leadership, the Consulate General of the Korea in Toronto has not only strengthen exchange and cooperation between Korea and Canada but also ensured the safety and civil rights of Korean citizens and expanded various consular services to both Korean and Canadian citizens.

Raju Das is a Professor of the Department of Geography, York University: His areas include radical political economy, international development, state-society relations, and social struggles. His books include Reflections on India: Critical Perspectives on its Society and Economy (2019) and Marxist Class Theory for a Skeptical World (2017), both from Brill. His current SSHRC-funded project is Neoliberal Industrialization the Rural Periphery, and Uneven Development in India.

Joshua Fogel has taught at Harvard University (1981-1988), the University of California at Santa Barbara (1989- 2005), and York University (2005 -). He has been a visiting professor at several institutions, including the Institute for Advanced Study (2001-2003). He has produced over 60 books, mostly recently: A Friend in Deed: Lu Xun, Uchiyama Kanzo, and the Intellectual World of Shanghai on the Eve of War  (Ann Arbor: Association for Asian Studies, forthcoming 2019).

Laam Hae is an Associate Professor in the Department of Politics at York University. She studies and teaches subjects regarding urban political economy and social movements with the framework of socialist feminism and critical-race theory. Hae has written about popular struggles over gentrification, city marketing, zoning regulations, the militarization of urban space and "the right to the city," both in North America and East Asia (specializing particularly in South Korea).

Celia Haig-Brown is the Associate Vice-President of Research and a Professor in the Faculty of Education at York University. She has made vital and lasting contributions to the evolution of many disciplines. She has forged new pathways in indigenous education, gender studies, social and ecological justice, research methodology and teacher education. This work has, in turn, influenced educators, academics, and policy-makers across Canada.

Theodore Hughes is a Korea Foundation Professor of Korean Studies in the Humanities Department and the Director of the Center for Korean Research at Columbia University. He is the author of Literature and Film in Cold War South Korea: Freedom's Frontier (Columbia University Press, 2012), which was awarded the Association for Asian Studies James B. Palais Book Prize.

Theresa Hyun is a Full Professor of the Department of Humanities at York University, where she teaches Korean culture and literature. Her representative book-length publications include: Writing Women in Korea (University of Hawaii, 2004), A Cup of Tea at P'anmunj m (original Korean-English poetry) (2012) and Riding the Peace Express (original Korean-English poetry (2016), both from Siwa Sihak. Her current research focuses on literary translation in North Korea.

Hong Kal is an Associate Professor of Visual Art and Art History at the School of the Arts, Media Performance, and Design at York University. She teaches art and visual culture of East Asia. She is the author of Aesthetic Constructions of Korean Nationalism: Spectacle, Politics and History (Routledge, 2011). Her current research focuses on trauma art, socially engaged art and artistic intervention in gentrification in Korea.

Ann H. Kim is an Associate Professor in the Department of Sociology at York University. Her research interests include three main areas: migration studies, race and ethnicity, and urban sociology. She is the co-editor of Korean Immigrants in Canada: Perspectives on Migration, Integration and the Family (2012). and Outward and Upward Mobilities: International Students in Canada, Their Families, Structuring Institutions (2019), both from the University of Toronto Press.

Thomas Klassen is a Professor in the School of Public Policy and Administration at York University. He has been a Visiting Professor in many institutions in Korea, including Yonsei University.  His publications include the edited volumes, Retirement in Japan and South Korea: The past, the present and the future of mandatory retirement (2015); Korea's retirement predicament: The ageing tiger (2014) ; and Retirement, work and pensions in aging Korea (2010).

Abidin Kusno is a Professor at the Faculty of Environmental Studies and the Director of the York Centre for Asian Research at  York  University. His publications  include: Visual Cultures of the Ethnic Chinese in Indonesia (Rowman & Littlefield , 2016) ; After the New Oder: Space, Politics & Jakarta (Hawaii University Press, 2013); The Appearances of Memory: Mnemonic Practices of Urban Form in Indonesia (Duke University Press, 2010); Behind the Postcolonial: Architecture, Urban Space & Political Cultures in Indonesia (Routledge , 2000) .

Ahrong Lee is an Assistant Professor of the Department of Languages, Literature, and Linguistics. She received her Ph .D. in English ( 2009), concentrating in Linguistics, from the University of Wisconsin-Milwaukee. Her research interests include Korean linguistics, second-language acquisition, foreign-language pedagogy, curriculum development, and the integration of technology in foreign- language education.

Byung Seung Lee is Director of Korean Education Centre in Canada. The Korean Education Centre in Canada has been established by the government of the Republic of Korea in order to educate Korean-Canadians about the Korean language and culture and expand their pride in their Korean heritage. Under his directorship, the Centre has supported Korean Language Schools in Ontario and Manitoba, while promoting exchanges and cooperation between Korean and Canadian educational institutions.

Rhonda L. Lenton is York University’s eighth President and Vice-Chancellor from July 1, 2017, she joined York University in 2002 as the Dean of the Atkinson Faculty of Liberal and Professional Studies, and served as York’s inaugural Vice-provost Academic and Provost. She was an Associate Dean and Professor of Sociology at McMaster University. At York, she has led a number of significant initiatives in areas of academic planning, institutional change management, the alignment of academic priorities. resources and strategic enrolment and complement planning.

Radhika Mongia is an Associate Professor of Sociology and a faculty member of graduate programs in Sociology, Political Science, Gender, Feminist and Women’s Studies, and Social and Political Thought at York University. She is the author of Indian Migration and Empire: A Colonial Genealogy of the Modern State (Duke University Press and Permanent Black Press, 2018).

Hyun Ok Park is an Associate Professor of Sociology at York University. Her research focuses on global capitalism, critical theory, transnationalism and diaspora, and empire. She is the author of Two Dreams in One Bed: Empire, Social Life, and the Origins of the North Korean Revolution in Manchuria (Duke University Press, 2005), and The Capitalist Unconscious: From Korean Unification to Transnational Korea (Columbia University Press, 2015).

Janet Poole is an Associate Professor of the Department of East Asian Studies, University of Toronto. Her interests encompass aesthetics of colonialism and modernity, history and theories of translation, and literary translation. Her books include: When the Future Disappears: The Modernist Imagination in Late Colonial Korea (2014, Modernist Studies Association's Book Prize): Eastern Sentiments (translation, 2013) and Oust and Other Stories (translation, 2018), all from Columbia University Press.

Nardo Razack is an Associate Dean of Global and Community Engagement and a Professor of Social Work at York University. Her research focuses on decolonizing pedagogy, critical-race and spatial theory, and identity and nationalism in international social work. She co-edited the journal, Social Justice: A Journal of Crime, Conflict and World Order. Dr. Razack is a co-investigator on a project titled: Engaging global Dialogue: decolonizing pedagogy and partnerships.

Andre Schmid is an Associate Professor and the Chair of the Department of East Asian Studies at the University of Toronto, where he has worked since 1997. He is the author of Korea Between Empires, 1895-1919 and is currently working on a book concerning the social history of North Korean postwar reconstruction between 1953 and 1965.

The Inaugural KORE Conference is presented by the Korea in the World, the World in Korean Studies project

Supported by The Academy of Korean Studies. 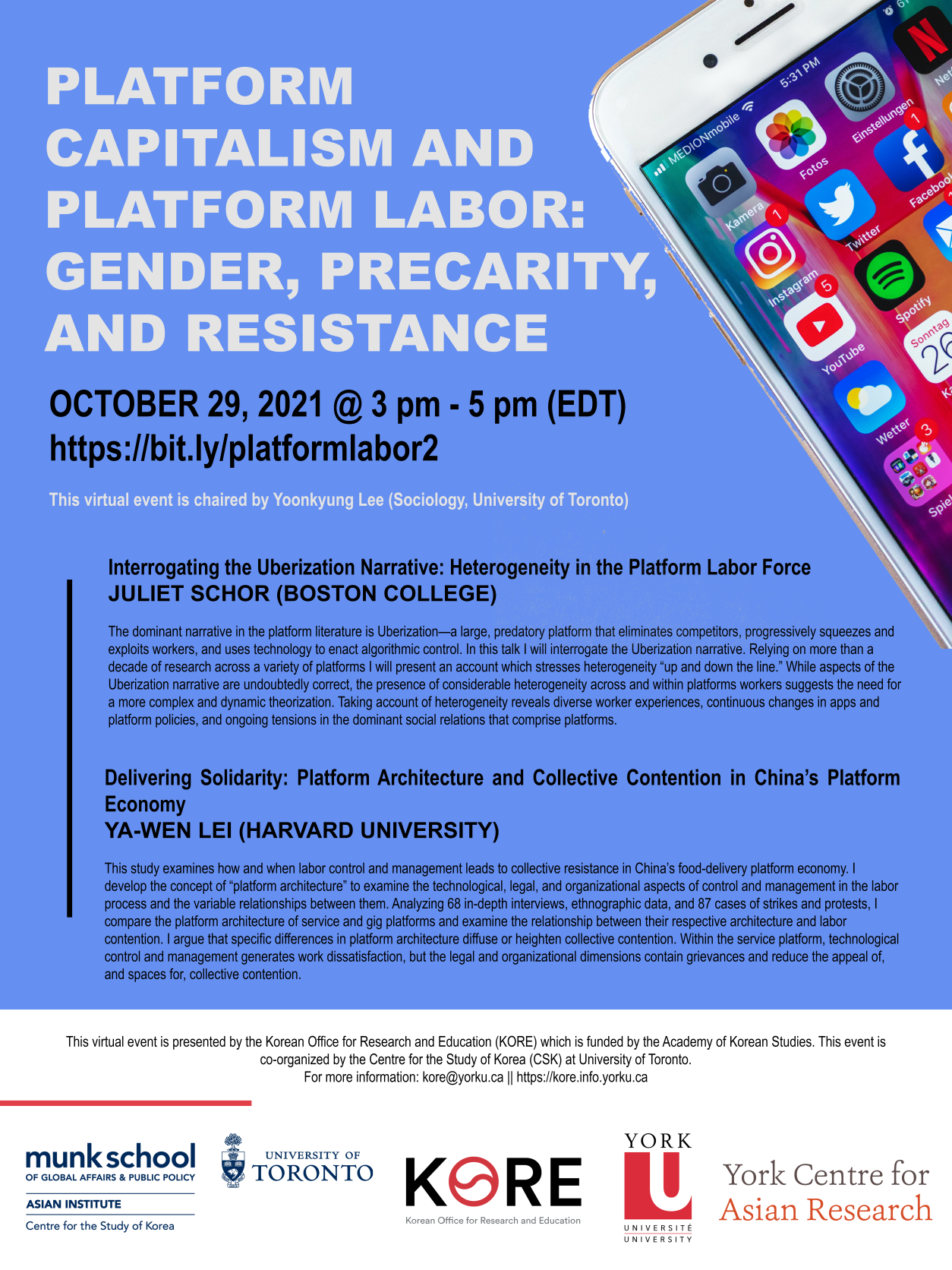