The Specter of Fascism: Then and Now 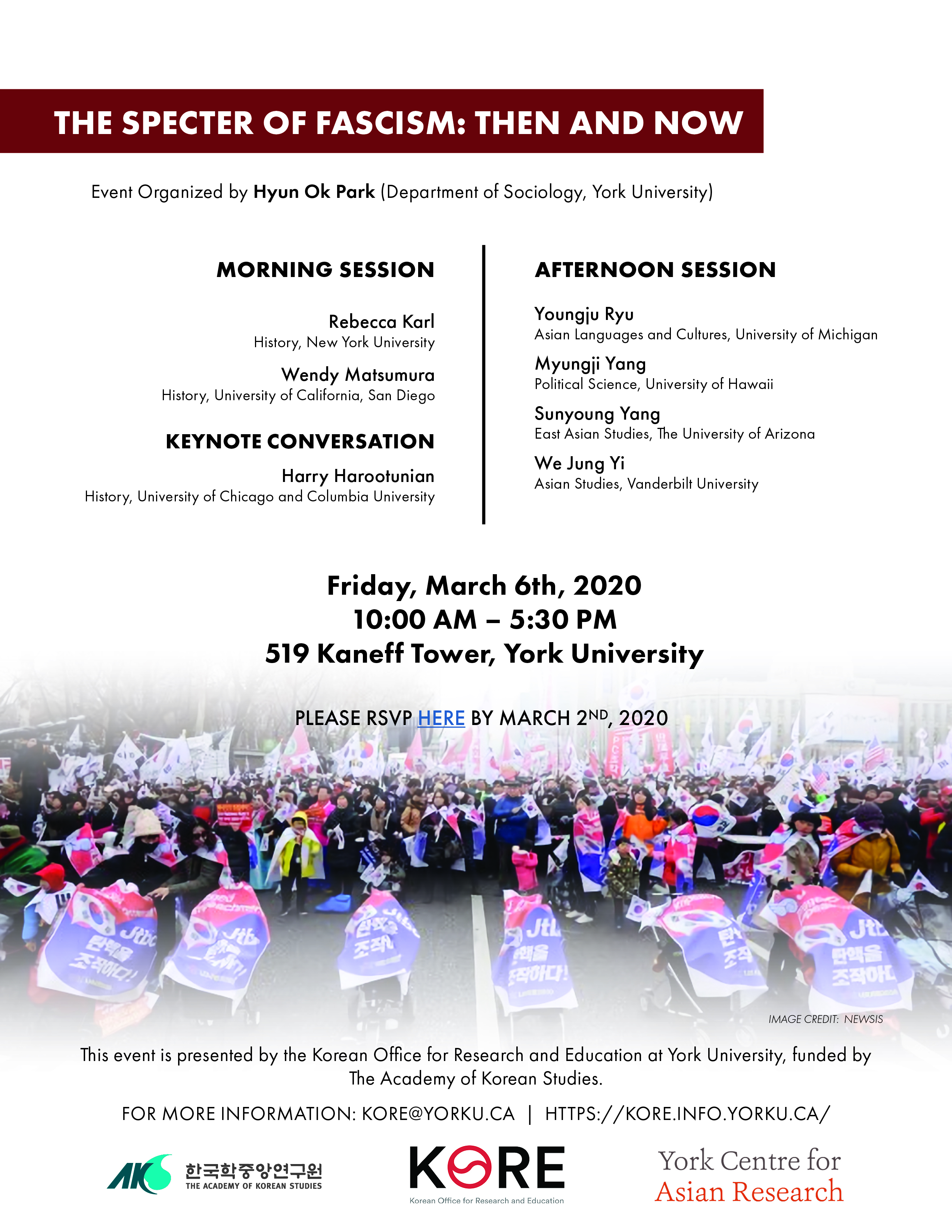 The Specter of Fascism: Then and Now

“The New Face of Fascism in Japan: Some Reflections on the Politics of Anachrony and Archaism”

In this talk I’ll be concerned with one of the unnoticed consequences of Gramsci’s conception of passive revolution under which I would classify Japan’s Meiji Restoration of 1868. Its importance appears in the way such revolutions defer indefinitely the difficult question of resolving problems from the past in the present and the demand to finding ways to overcome the force of its barrier to the future. What emerges from Gramsci’s formulation of passive revolution, often called revolution/restoration, was the privilege granted to the figure of untimeliness in the historical process resulting from the contemporization of the non-contemporaneous (emblematic behavior of all capitalist development), which Japan’s present still radiates in a politics that since the Meiji Restoration has appealed to the archaic and narrative of origin “coiled” around the political power attributed to the emperor to mediate the state that rules in his name.  The effect of this archaic enwrapping of the political was to forge and fuse different temporalities into a mixed and heterogeneous combinatory of pasts and present to mark the living unevenness of Japan’s modern society. Yet, this “coiling” assigned to the archaic and mediate the power of imperial statecraft, reinforced by its repetitive claim of timelessness, became a culturally spiritualized principle of belief that could be inverted into a political unconscious bound to an excess of myth that summoned the world of myth rather than origins. The inversion operated in moments of crisis that would activate the imperative of a false anachrony capable of unleashing the raw material of archaism that can claim no historicity to serve the promise of a fascist imaginary eager to identify a present with a fictitious past and implement its realization.  Yet, as we must recognize, the presence of false anachronies and anachronism represent a ghostly force resembling the living dead among the living who it desires to devour. This is the strategy I will take to follow Adorno’s advice of the necessity of a working through of fascism because of the persistence of both its objective and subjective conditions.

This talk will examine the series of essays written by Marxist philosopher/ economic theorist Wang Yanan about China's wartime economy. In the context of global war, Wang theorized how Germany/Japan handled their economies in comparison to how the US/UK handled theirs. Wang's purpose was to situate China's economy in a "sociology of war" so as to better grasp the Marxist potentials opened through the displacements of industry and finance from the coasts into inland China. *Rebecca Karl will draw this talk from her books, including China’s Revolutions in the Modern World (Verso, 2020)

This talk examines the relationship between the myth of the absence of Korean workers in Japanese agrarian villages as necessary for the constitution of the category of noka (farm household) as material and ideological exemplar of the Japanese nation and the erasure of non-wage-earning Korean women from the Japanese economy altogether. It argues that the housewifization of women in Japan’s small farm households – a primary goal of the Ministry of Agriculture’s post-World War I oikonomic policies – was made possible through the absented presence of Korean agricultural workers and the invisibilized labors of Korean women who were not recognized as value-producing unless the worked for wages. In so doing, this paper demystifies the image of the Japanese village community comprised of and sustained by residents who could trace their genealogies to before the enactment of the modern family registry system in 1872 and second, illuminates the indispensability of Korean migrant workers in enabling the social reproduction of the Japanese family in the countryside. It concludes with a brief reflection on the implication of this analysis for theories of Japanese fascism.

Taegeukki, the Korean national flag, is at the heart of virulently contentious politics unfolding in South Korea today. If the candle represented the defining symbol of “plaza democracy” that brought down the conservative Park Geun-hye government in 2016-2017, Taegeukki has become the symbol of ultraconservative activism, which has grown in two years since Park’s impeachment from a fringe movement led by a relatively small and zealous group of Park’s supporters to one encompassing a sizable coalition backed by political parties and protestant churches. As activists on the left seek to “take back” Taegeukki, the vexillographical struggle over the deployment of the national symbol within competing repertoires of protest opens up a productive site of analysis at the intersection of modern Korean history, social movement theory, and performance studies. Examining the use of various banners during political rallies and of the national flag in particular, the presentation will locate the recent rise of far right street politics within the history and culture of protest movements in South Korea since the 1980s, and ask whether a protest repertoire can maintain legibility and coherence across ideological and political lines.

This talk examines how the Korean right has rebuilt an ideological and organizational infrastructure and tried to recover political legitimacy and symbolic power in the post-authoritarian period (1987-present). Existing scholarship on the far right often focuses on party and electoral politics. Yet success in electoral politics does not depend only on the parties themselves, but also on ways in which far-right parties work together with other conservative organizations and networks to promote conservative ideas. The overthrow of the authoritarian regimes and the arrival of electoral democracy in 1987 did not completely undo authoritarian political institutions and practices. I argue that the Korean right and its allies—mainstream conservative media, government-sponsored organizations, and big businesses—have been able to capitalize on these authoritarian legacies. In the newly democratized setting after left-leaning reformist forces came to power, the right also adopted leftist strategies by forming extensive networks, establishing new civic organizations and think-tanks, and developing conservative ideas and programs. While institution-building and networking efforts have produced a highly integrated and dense environment and enhanced the right’s mobilization capacity, a fixation on the agendas of anti-communism and developmentalism (and accompanying insistence on glorifying two authoritarian figures, Syngman Rhee and Park Chung Hee) have resulted in a failure to broaden the right’s constituency. This paper enhances our understanding of the historical continuities between the authoritarian and post-authoritarian periods and works toward overcoming the dichotomies between party and non-party actors and between institutional politics and social movements.

Online politics in South Korea is made up of extremes and everything in between, from radical leftist movements to the extreme right-wing stances, from misogyny to feminist counterattacks turning misogyny back on men. The common link is the important role that humor and laughter play in sustaining online communities and creating political aesthetics. Humor and laughter, as forms of expression and deflection, have mediated different political stances as a way to overcome the fear of those in power by ridiculing them. However, humor and laughter have also functioned to effectively mask hostility towards others while blurring political issues. This paper examines the dynamics of humor and laughter in the politics of online postings in South Korea by focusing on the emergence of Ilbe.com, a right-wing anonymous online user community. The ways in which Ilbe users appropriate humor and laughter show the different possibilities and directions of politics initiated by online communities, demonstrating that politics on the Internet continuously evolve through conflict and negotiation even if politically diverse groups share similar styles of humor. Different political ideologies including far-right, pro-capitalist thoughts can smoothly and quickly permeate a given society through the media of humor and laughter. My in-depth interviews with Ilbe users in their twenties tell us stories of how younger generations raised by left-leaning parents become politically right wing, pro-capitalist, and misogynist.

This talk attempts to historicize the norm of kakchadosaeng (“surviving on your own”) in neoliberal South Korea by looking at the ways in which the younger generation retrieves the country’s unsettled past in a new media form: the webtoon (web cartoon). In foregrounding the precarious survival of surplus lives at moments of national crisis, these webtoons both mobilize and revise the tradition of dissent, including the minjung imaginary from the 1980s. With the capacity of comics (manhwa) to operate as a hybrid medium maximized in digital cultural environments, such cultural translation of earlier aesthetics into the present not only animates a chain of witnessing beyond the textual surface, but also forges affective connections among the subjects of suffering across temporalities. By stimulating multisensory interactions between broken characters from the past and contemporary content users, the graphic power of webtoons allows the latter to access, negotiate, and reimagine the ruins of violence within their everyday landscape. Of particular concern in this study is the figure I identify as the patient-agent who brings together the forces of fragmentation and collaboration in acts of remembering. In reassembling the senses of being alive and dead, this figure elicits practices of mourning that are at once virtual and material, fluid and networked, intimate and public.

This symposium is organized by Hyun Ok Park (Sociology, York University) and  presented by the Korean Office for Research and Education (KORE) at York University, funded by The Academy of Korean Studies